Malengine is one of the relocated community which is located at Fetakgomo/Greater Tubatse municipality in Limpopo province.
However Richard Spoor deal with the matter of cracked houses, the company of Bokoni platinum mine delayed the matter until they placed on maintenance and care situation, is three years now we faced similar problem.
Anglo American ashamed to what happened they decided to take on with the issue on behalf of the company, but there is still some delaying tactics.

I today wrote an email to one of their consultant Blessing who response by saying the company was the one who delayed their work, but hopefully the site meeting on Friday this week.
What forced me take quick action is the rain which took three days nonstop.By cde Selowa. 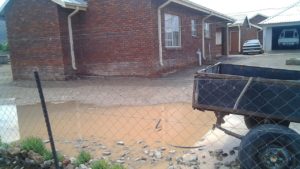