Community Meeting with the Municipal Executive

Today at Ga Mampa we had a meeting that was held at Moshate with the municipal executive as they promised that they will be at our village on 20th of September 2017.So they did as promised. After long period of not serving the community, they promised that they are willing to cooperate with our community. Other executives of the municipality told us that if the councillor give us any problems they will deal with her. Maisela the councillor told us about the problem of unfinished electricity project in our community. She said “the contractor has run away so that there won’t be lights for those who don’t have it, the council is still trying to get hold of that contractor”

Visit from the Human Rights Commission
The Human Rights Commission visited houses which fall under 500m radius at Ga Mampa. They were doing house to house visit and took photos of cracks in each household. They asked the people’s leaders for any information they had. They gave them everything which they received from the mine including forms which asked the community to sign giving permission for the mine to blast within the 500m radius 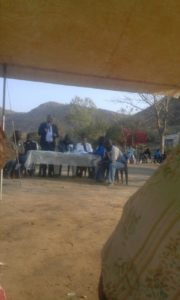 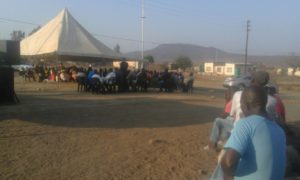