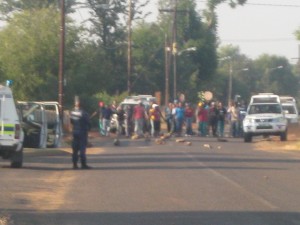 I was one of six young females from Chaneng who were arrested and a few injured by rubber bullets, while participating in a peaceful march. The youth of Chaneng took to the streets on the early hours of 21st April barricading roads with burning tires, trees and stones on the village main roads making sure there was no movement in the village.Their voices were clear as they said “we won’t allow cars in and out of our village, no one goes to work” Public Order Police blocked the group, encircled them, set off the tear gas and shot rubber bullets even in people’s yards.

The protesters were frustrated by the following issues:

This stamp was stolen on Thursday the 14th, where by Mmakgosana – Nthoto Setshoane came into Chaneng Kgotla offices pretending to be in need of proof of residence, and in her own words “hijacked the stamp” and issued fake/invalid proof of residence with forged secretary’s signature. Thirty minutes after she stole it , charges of theft were laid and the thief was never arrested .Instead she laid counter chargers of intimidation against bannakgotla (members of Chaneng tribal council).They were summoned to appear at Bafokeng tribal court on Monday the 18th.The stamp that was evidence in the case of theft was then taken to Bafokeng Cribal court so that the issue could be resolved. The issue is still unresolved. Evidence in case is not in the possession of the police.The community is not able to issue any proof residence and youth programs are stuck as they need the stamp for letters to authorise and to submit c.v’s to local mines. 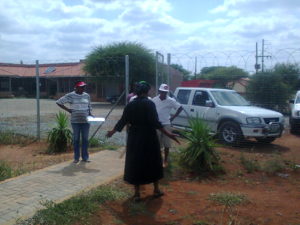 This exploration activity is taking place next to cattle kraals whereas there was no public/community consultation regarding the matter. The process has been delayed from October 2011 when the Kgosana of Chaneng (headman) Bigboy Setshoane who was suspended by the community served the mine with the letter notifying them that he was suspended  the task team that has been engaging with management  from 2011, and to the community’s surprise few day after that the drilling was taking place, and all he could say about it was “I am suspended so I don’t have powers to stop the drilling”. But the youth didn’t take his statement lying down. They felt that if he could stop the task team’s involvement in community engagement meetings regardless of his suspension it meant he was still in power. So they waylaid him and his brother to the exploration site, where he had to demand management to stop. During the negotiations for the shutdown of the machinery one young female the community members was kicked by mine security on her gentiles in the presence of the South African Police, while she taking pictures for a community programme she works on. She informed the warrant officer who was present at that time and he said  “sorry” . When she questioned why hes said sorry and yet did nothing to the suspect, the warrant replied “don’t teach me how to do my job, if you want to lay charges go ahead”.

The community action managed to temporarily stop the drilling macines.

On the early morning of the  20th April membersof youth committee and Kgosana went to Styldrift to serve the project General Manager Mr Velile Nhlapo with a letter that demanded that the drillings must stop by 12:00pm and other issues and did not find him but  left the letter and arranged to meet him at 14:00pm, but due the meeting with Chaneng youth organization, Chaneng Bannakgotla committees and Rustenburg Local Municipality  representatives, they couldn’t meet and rescheduled for the following week. A meeting was held with Representatives from Rustenburg Local Municipality ( the MMC of public safety- Mina Mphengu). The Director of Law enforcement ( Mr Khumalo, Director of public safety and conflict resolution – Mr Kotetsi) , and the Ward Councilor – Mr Mhlungu. In the meeting the community representatives informed these government about the urgency of this issues. After the meeting they all went to Mmakgosana to retrieve the community stamp but failed as the stamp was at Phokeng tribal court. The community reps were promised that they will try to make sure that by Friday the 22nd or  Monday the 25th will returned were it belonged. That was not what the youth needed to hear as they could access certain services due to the stamp. The felt that since the local government had failed them, and that they had lost faith in the police, they should take action on their own. That’s what lead to a “NO MOVEMENT” protest that left many people injured by rubber bullets fired by Public Order Police and six arrested and detained for seven days without trail. THose who where injured by rubber bullets did not receive medical attention, their wounds were left to rot. 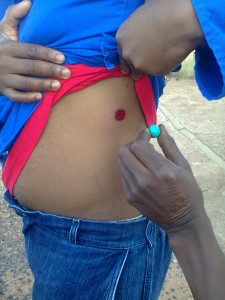 While in detention i interviewed by my fellow cell mate

– Nthabiseng – “I was shocked when I realized that am arrested on Human Rights Day while excising my human right”.

– Nelly – ” I was shot with rubber bullets and my arm joint was dislocated and my knee was bleeding. When I told the police they drove their van even faster and didn’t provide me with medical attention for the whole seven days”.

-Lorraine – “It didn’t make sense to me to be arrested while exercising my human right.I lost all faith in the police”.

– Mpho – “That was not the end of exploitation. When we passed our neighboring village Rasimone, some man came and forcefully took our pictures, and I recall him saying “this will be easy, they all females” and we got back on the police van and got charged with public violence and detained for seven days with no trail at Phokeng police station, and we are now out on bail”.